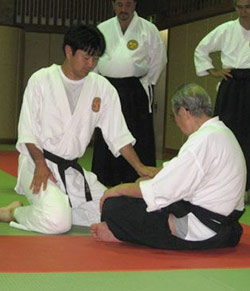 After the founder resigned Roppokai, he had still kept pursuing Aiki technique and practiced to improve his Aiki closer to Okamoto Seigo's Aiki.

"Okamoto Seigo had told me that he considered his Aiki is only 80% completed. Right now, my Aiki is only 10 to 15%. Yes, it still very low, but I know that I'm on the right pass of Okamoto Sensei." --- the founder. 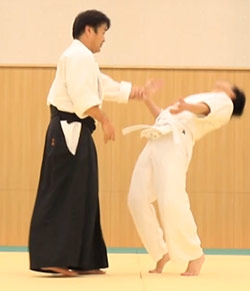 Combining both Aiki Age and Aiki Sage in many different angles will produce uncountable attacking and Kuzushi in one technique, and that is the technique of Aiki.

All of Aiki techniques are made from the combination of Aiki Age and Aiki Sage with those circles. Also, Aiki Sage itself is already a powerful technique to throw a person.

There are about 300 basic techniques of Aiki in Meishinryu, and you can create any techniques once you understand the principle of Aiki and how Aiki creates the techniques. In Meishinryu, we train those basic techniques to build the accurate circle of Aiki, and late you will apply breathing and counter reflex to complete Aiki technique. Without the correct circular motion, Aiki will never be effective even though there is a correct use of breathing and counter reflex.

Yokohama main Dojo
We have a classe every once a week at Yokohama. Nitta Chiku Center 2F From 7:00pm to 8:30pm
The location

Please contact us to confirm the date and time before you visit this dojo. E-mail

Also, please feel free to contact Toshi Asaka for inviting the instructor to your country or location to have a seminar or any international relationship with Meishinryu Aiki-Jujutsu Tenshokai.